In March 2014, the “Dear Future Mom” campaign video, supported by seven European associations, was broadcast all over the world for World Down Syndrome Day. 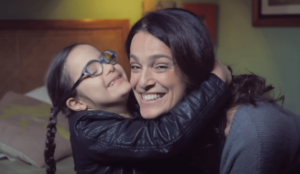 This video featured people with trisomy 21 from all over Europe speaking to a mother who has just learned that the child she is expecting is a carrier of trisomy 21, with this message “People with Down syndrome can live a happy life, it depends on all of us”.

This video was censored in France by the CSA (The French Broadcasting Authority) with the reason that the message was “disturbing to the conscience of women who, in accordance with the law, had made different personal life choices”

Ines De Pracomtal (a girl with Trisomy 21 who was featured in the vide) and the Jérôme Lejeune Foundation made an appeal challenging the CSA decision, in front of the Council of State and after the rejection at the European Court of Human Rights in 2017, to ask for the recognition of the attack on the freedom of expression of people with Down syndrome.

In 2020, The European Court of Human Rights agreed to examine the case which acknowledges the right of Inés and every human being to a just opportunity to express themselves. After two years of examinations and on September 1st, 2022, the European Court of Human Rights has finally rendered its judgment on the case of the “Dear Future Mom” video. “Inadmissible”, is the ECHR ‘s decision.

EU for Trisomy 21 believes that Freedom of expression is the foundation of every free and democratic society. It is founded in international human rights law, and we believe that every voice deserves a chance to be heard. We will continue advocating, campaigning and working to make the voices of people with Down syndrome heard in Europe and beyond.

You can watch the Video of Dear Future Mom here: https://www.youtube.com/watch?v=Ju-q4OnBtNU